My interest in botanical illustration is quite recent. I was expelled from art class in grade 7 for talking – although that didn’t stop me talking, it did stop me pursuing any drawing or artistic activities for the next 50 years! I am a keen gardener with a particular interest in Australian natives, and this is what led me to enrol in one of Lauren Black’s beginner botanical illustration classes.  Despite my trepidation and much to my surprise, I discovered that I really loved the process of drawing in particular. As a member of Botaniko, I have been able to combine my passion for local history and storytelling with botanical illustration. I have recently been experimenting with vegetable inks and eco-printing methods and hope to develop this in future artwork.

2020 – Discovering the Flora of Wind Song 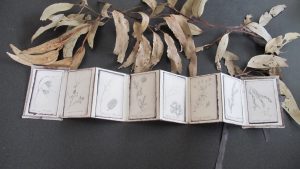 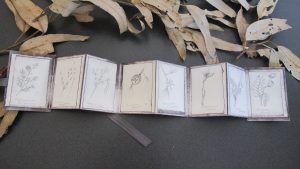 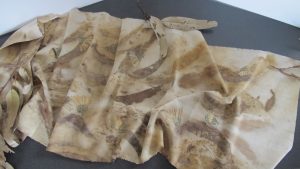 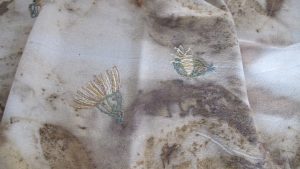 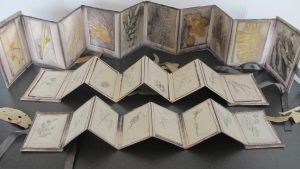 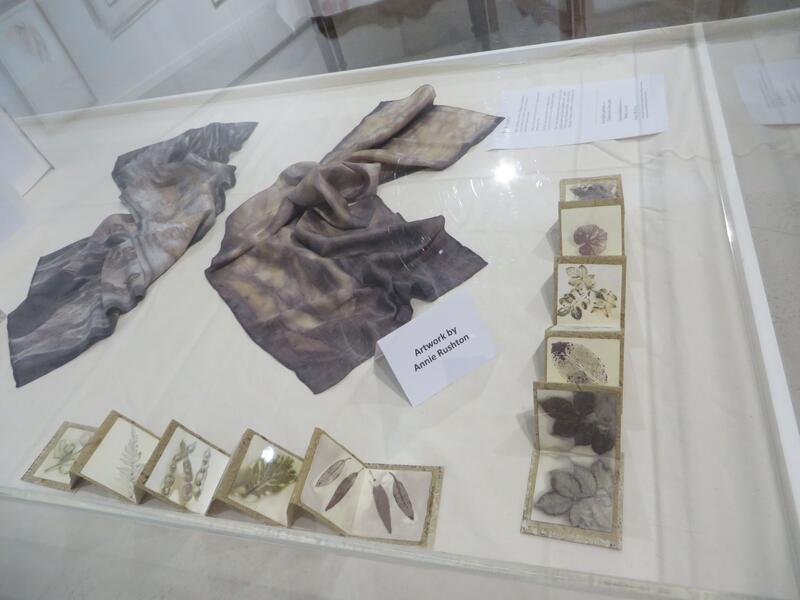 Frederick Mackie was very impressed with the domestic gardens in the fledgling colony. The day after my arrival I took a walk before breakfast and was highly delighted with the beauty of the plants in the little town gardens. He went for frequent walks and often commented on particular plants that were thriving.

Fascinated with the new environment in which he found himself, Frederick Mackie enthusiastically explored the bushland, readily adopting the local term for forest, ‘the bush’.

Took a long walk this morning into the bush towards Mt Wellington which is the first time I have been surrounded by primeval forest. I was disappointed in it; it is in fact being rapidly cleared and the few large trees that remain are more or less charred with fire, some quite burnt through, others partially …. the effect is quite dismal. [p. 52]

The bush here deserves the name of forest for it consists of fine timber trees, gum trees principally. There is very little undergrowth and grass everywhere is covering the ground. [p. 53]

F.C.’s sons are complete sons of the forest: they delight in the bush, fell timber, split shingles, sow, reap, shear and plough, indeed their accomplishments would surprise our English farmers. [P. 57]

The large numbers of Tasmanian blue gums (which he erroneously termed E. robusta) were frequently noted by Frederick Mackie as he travelled the colony.

The flowers (a circle of stamens) are just expanding and are very beautiful. [p. 37.]

Frederick Mackie took his missionary responsibilities very seriously and travelled widely in the colony to spread the Quaker message.

The blue gum leaves printed on religious tracts represent the bush through which he travelled, and the Correa backhouseana commemorates the name of his Quaker predecessor James Backhouse who, together with G. W. Walker, Mackie’s host at Narryna, constituted the first Meeting of Friends twenty years earlier. He too had travelled as a Quaker missionary in early Van Diemen’s Land.

Called on Thos. Squires who leads the life of a recluse, he gladly accepted a few tracts. (p. 52) 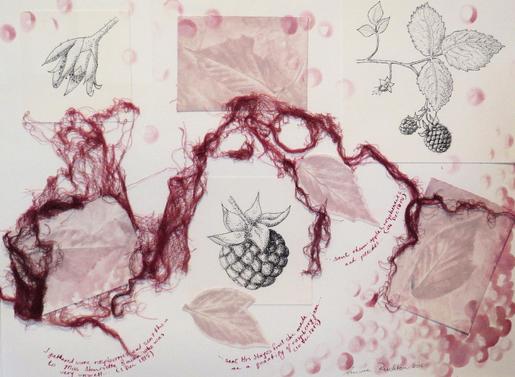 Memories of home, gentility, pleasure,
Luxury of a gift in a foreign land,
Indulge the ladies,
Solace the sick…
Leaf biographies captured in juice,
Bequeath their stories to paper through time.
Raspberries grown on a foreign shore
Berries in name, but so much more…

Robert Knopwood grew raspberries very successfully in his Cottage Green garden. By 1815, his crops were bearing so prolifically that he frequently invited friends to his garden to eat the fruit and gave much of it away to friends.

It seems likely that Knopwood was growing red raspberries, as in August 1819, he and a friend rowed across the Derwent River to collect some white ones from a farm at Risdon. However, when they saw the tenant was home, they went to a nearby farm instead (2). Was the Reverend Chaplain planning to steal the white variety in order to broaden the range of his own crop of red raspberries?

By 1828, both red and white Antwerp varieties were advertised for sale in Hobart(3). By this time, raspberry crops in Van Diemen’s Land were claimed to be “better than in England”(4) with the reputation for “growing to an enormous height with such quantities of fruit, as have in all probability, never been seen anywhere else(5).” Raspberries are still an important small fruit export for Tasmania.

The Eucalyptus globulus is Tasmania’s floral emblem and was first collected by the French naturalist Jacques-Julien Houton de Labillardière in 1792-93.

Eucalyptus leaves are rich in tannins and produce rich coloured dyes in various shades. This artwork has been created using natural blue gum dyes together with graphite pencil. 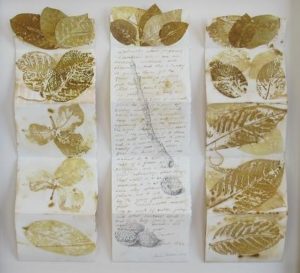 Walnut trees have been harvested for thousands of years for food and medicine. Brought to Tasmania in the early days of the colony, the trees were large enough to give a crop of nuts by 1826. By 1847, they were growing so well that their commercial opportunities were being promoted.
All parts of the tree were used ­ nuts were harvested for food, wood was prized for fine furniture and nuts, leaves and bark were used for dyeing and medicinal purposes.
Walnut tinctures, teas and ointments were used to treat a range of medical conditions including tonsillitis, gout and rheumatic complaints, leaves were recommended for intestinal worms and nuts were preserved in syrup for use as a purgative. Bakers used finely ground walnut shells to stop bread sticking to the oven shelves when cooking.
In the Hobart Town Courier in 1834, a doctor claimed that a large family would benefit from having a walnut tree as it would abridge the doctor’s bill £10 a year! It is not known when the walnut tree was planted at Port Arthur but it is believed to have been before 1860. Its location in the garden of the Junior Medical Officer may mean that it was grown primarily for medicinal purposes. 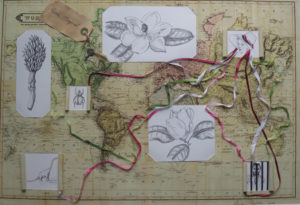 Magnolia – A Window Through Time

The Magnolia is an ancient genus named after French Pierre Magnol. Co-existing with the dinosaurs, fossilized specimens of plants belonging to the Magnolia genus date back 95 million years. Appearing before bees, its large flowers evolved to avoid damage from pollinating beetles.

Pierre Magnol was the first to publish the concept of plant families. Carolus Linnaeus later built on his work to develop the plant classification system (or ‘key’) still in use today.

The Magnolia grandflora is native to the SE United States, where it was widely used for medicinal purposes by American Indians and later early white settlers. It was first brought to Great Britain in 1726 and quickly became a much prized tree in the gardens of wealthy plant collectors in Europe and the UK.

We know Magnolia grandiflora was first shipped to Van Diemen’s Land in 1830 by Robert Espie of Bagdad. No records exist of its introduction to Port Arthur but in early photos it appears as a mature tree.

The silk ribbons flowing from the woman’s bonnet in the artwork represent the various colours associated with the predominantly white magnolia flower at various stages of its development towards maturity.